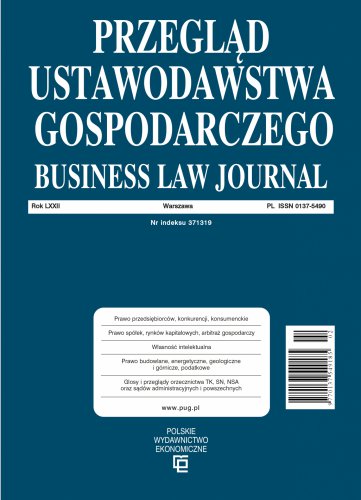 The manifestation of the institution of incompatibility of positions in the law of local self-government is, inter alia, 24f par. 2 of the Act of 8 March 1990 on Commune Self-government (u.s.g.). The principles of prevention of corruption in the local government set out in the acts are the subject of numerous critical remarks in the science of law. In particular, the relationship between art. 2 par. 6, art. 4 and art. 6 par. 1 of the Act of 21 August 1997 on Limitation of Conducting Business Activity by Persons Performing Public Functions in relation to art. 24f par. 2 u.s.g. is problematic. Problems also arise from the issue of being members of the management or control and audit authorities as well as proxies of commercial companies with the participation of legal persons of any local government units or entrepreneurs in which such persons participate, by persons indicated in art. 24f par. 2 u.s.g. Indicated specific issues was devoted to this study.

The subject of the article is the amendment to The Commercial Companies Code which was in connection with the COVID-19 epidemic. The author presents the main points of the regulation. He underlines that it concerns new rules of functioning of the bodies of the capital companies. The main purpose of the amendment is to enable the functioning of capital company bodies in a remote or near remote stand.