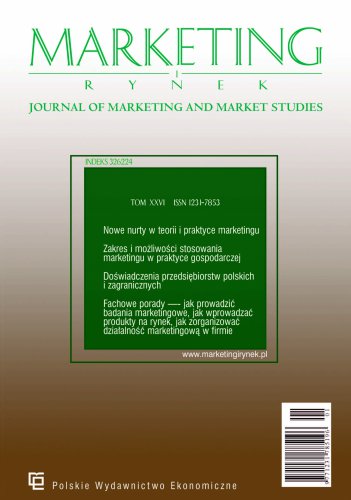 Journal of Marketing and Market Studies 04/2022

The subject of research presented in the article is the managerial career of women in the context of Polish job market. The following research questions were formulated: 1. Which career models are most often realized by women? 2. What characterizes the so-called women's management style? 3. How does women's managerial career form on the Polish job market as compared to other countries in Europe and the rest of the world? In order to answer these research questions, article authors used method of critical subject literature analysis as well as a systematic review of research reports. The following results where formulated: the participants of women in managerial positions in Polish enterprises is large enough to allow Poland to be placed on the third place among 32 countries included in research by "Women in Business 2020", ahead of countries such as USA, Great Britain, Germany and France. These are, however, usually positions of medium and lower groups. Women in Poland constitute only 6% of CEO positions and only 15% of highest managerial positions. More than half of women admit experiencing hardship in career development due to their gender. Women which succeeded in managerial career path are in a great majority expressing an opinion that women and men in Poland do not have equal opportunities in career development and promotion perspectives. Moreover, women and men are not treated equally by employers on the job market. Women are less frequently taking up roles of business experts in the media and conferences. That is despite the fact of women having a higher level of education — more than 66% of university graduates in Poland are women.

In recent years, the development of the Internet and mobile applications has led to an increase in sales in thee-commerce industry and the creation of new online stores. Sellers, while looking for new approaches, create more online stores based on dropshipping model which is based on selling products that are physically located on producent site. This article presents the results of research, which was aimed to expand and deepen knowledge about trends and problems connected to dropshipping model. The research conducted, was based on data available in social media. New, current challenges and trends related to the dropshipping in Poland were found and presented.

Polish universities have undergone huge changes over the last 30 years. Traditional academic education in Alma Mater was supplemented by distance learning. However, the strategy for the development of education has never indicated the replacement of face-to-face activities with those online. As it turned out, the environment forced universities to completely change the paradigm of academic education based on mutual contact, exchange of views, or direct discussion. In March 2020, universities moved their activities to the Internet. The article aims to identify the challenges faced by Polish universities in the period of limiting the functioning of universities to counteract the spread of the SARS-CoV-2 virus. The article is empirical — it presents a case study describing the results of an experiment in which students of the University of Silesia in Katowice participated in human resource management. The author will present the survey and observations results regarding e-learning education during the pandemic, assessed in the context of the redefinition of a marketing service product. The main research problem revolved around finding an answer to the question: What are the reactions to distance learning among students?