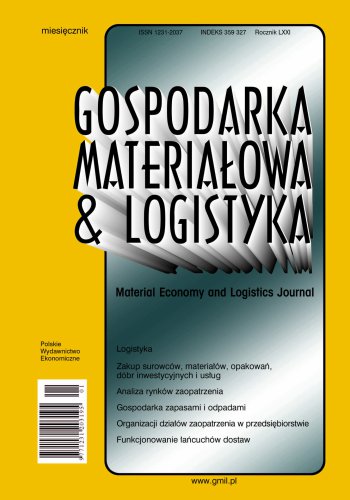 Most of the world's population now lives in cities. There are well known problems of contemporary cities existence, such as pollution, safety, congestion. These problems has to be solved, otherwise city population may decide to leave it, which would cause a city death. One of possible ways to faith with these problems is by using city logistics. There is also a new concept of ecocities, developed by Richard Register from USA. An ecocity is a human settlement that enables its residents to live a good quality of life while using minimal natural resources. It has special rules for designing its infrastructure. For example its buildings make best use of sun, wind and rainfall to help supply the energy and water needs of occupants. Generally multistory to maximize the land available for green space. The goods which are produced in a ecocity has to be designed for reuse, remanufacture, and recycling. The industrial processes used in producing goods involve reuse of by-products, and minimize the movement of goods. It has a labour intensive rather than a material, energy, and water intensive economy, to maintain full employment and minimize material throughput. There are also special kind of logistics, which we may need to keep ecocity alive. They are described in this paper.

Philips Royal Electronics is continuously improving its purchasing and supply strategies to maximize its efficiency in this area. All improvements are based on in-depth analysis of changing conditions of supply markets and company's needs. Basically three types of analysis are being conducted. First of all Philips aims to acquire broad knowledge about direct impact of purchasing strategies on company's financial achievements. Thus purchasing services have decided to implement Balanced Score Card, dedicated tool to procurement area. Secondly, all purchasing processes are precisely monitored and evaluated against 14 criteria. It is believed, that process improvements indirectly enhance company's competitiveness through its innovativeness, cost efficiency and quality culture. Finally, purchasing managers in Philips regularly appraise all current suppliers in order to motivate them to improve their performance. Philips suppliers are seen as core company's assets, which can determine ability to gain advantage over competitors.

Character of competition on international markets has changed, the battle about a client is led not by single enterprises but by integrated supply chains. At the same time the structure of supply chains has spread out from local to global network. The country, which is placed in the center of interest of multinational companies, is China. Its access to the World Trade Organization had strongly boosted its attractiveness for global investments. The main purpose of this article is to show the position of China in the supply chains of global companies. The presented results of research indicated the most important challenges for logistics in China. The exact analysis of this sector allows to define, on one hand, prospects, on the other hand, threats, for its development in the future. The article presents importance of China as the place of sourcing (low-cost country sourcing), with particular attention to sourcing strategies of global retail networks. The author leads also consideration to logistics of distribution and defines the most important distribution strategies of firms, which are doing business in China. Finally, strategy of Motorola Incorporated is presented as an example of the global company, which used the potential of China and developed the strategy of global partner supply chain and achieved success.

Global companies have to face new challenges and problems. The efficient management of different logistics activities needs to be seen as a strategic chance. Reverse logistics - when perceived as value-added service - can surely be a source of firms' competitive advantage. It is the field which is gaining still new interest and thanks to the potential profits, it is worthy of a deep analysis. The article defines the term "reverse logistics" and presents the costs of reverse logistics. It also refers to the growing interest of this business activity and shows the key processes of the efficient reverse logistics' management. Moreover, the development of this field is driven by the implementation of new law, rules, regulations and by the revolutionary IT solutions or technologies. On the other hand, there are also problems that make the reverse flows difficult to manage. Finally, practical examples presented in the article show that global players use reverse logistics as a chance of gaining loyal customers, building long-term business relations and strengthening their market position. Current and important terms like "social responsibility" and "sustainable development" are also embodied in the field of reverse logistics which guarantees social support for reverse flows.

One of the most recent reports by the consulting firm Aberdeen Group is entitled "The CPO's Strategic Agenda". Based on interviews with the management of more than 200 companies (65% from North America, 30% from EMEA, 5% from Asia Pacific), Aberdeen Group analysts have collected the most important challenges facing managers of corporate purchasing processes ("Chief Procurement Officer "- CPO). The great advantage of this report is the presentation of the collected data and the formulation of conclusions in a way that takes into account the existence of leaders and "laggards" in the field of procurement process management.

In recent decades, more precisely from the moment of the first report prepared for the Club of Rome, published in 1972 and the first energy crisis, which also took place in the early 1970s, the interest in renewable energy sources, including transport biofuels produced in the biomass conversion process, increased. This is due to many reasons, and the most important ones include: the ecological aspect, the decline in fossil energy resources and the increase in their prices on world markets, the social aspect, energy conservation. An important aspect and characteristic feature of the current transport fuels is the possibility of their substitution with other fuels produced from plants in simple esterification or fermentation/dehydration processes (1st generation biofuels), and in the future in physico-chemical processes (synthetic fuels and 2nd generation biofuels), ultimately leading to the use of hydrogen (3rd generation fuel, for example from coal or biomass - biohydrogen). The transition to new generations of fuels and biofuels is associated with the reduction of environmental pollution, e.g. by increasing the efficiency of converting the energy of carriers into mechanical energy of vehicles or the method of use; e.g. an electric motor system instead of an internal combustion engine.

On 7-8 December 2006, the 2nd Forum of Transport and Logistics Students "Translogistics 2007" took place in Wrocław. The forum was organized by the Scientific Circle "Logistics" from the Faculty of Mechanical Engineering of the Wrocław University of Technology. The meeting attracted over a hundred participants from all over the country, including guests from universities in Warsaw, Poznań, Kraków and Upper Silesia.