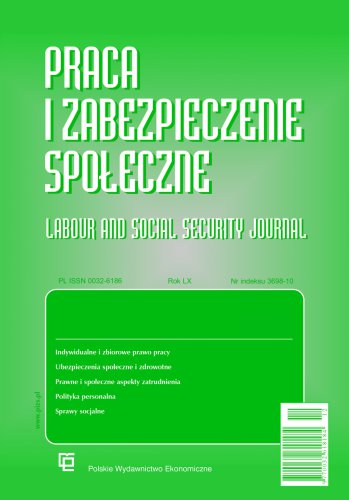 The elaboration is dedicated to the analysis of the EU Court of Justice judgment of 26 January 2021 in case C-16/19 VL v. Szpital Kliniczny im. dra J. Babińskiego in Kraków. CJEU was of the opinion that the concept of discrimination under the Directive 2000/78 may refer to less advantageous treatment within the group of employees with disabilities. The employer's decision to grant the allowance only to those employees who had submitted their disability certificates after the specific date may be discriminatory. In author's opinion, the interpretation made by the CJEU may have consequences that go beyond the dispute at stake. In the light of the ruling it seems that the Union concept of discrimination may cover the different treatment among individuals distinguished by the same protected characteristic.

The author puts forward that the pursuit of equality, which is a general determinant of the contemporary shaping of social relations, has always constituted one of the main, and perhaps the most significant reason for the existence and development of labour law as a separate branch of law, and for its expansion. She points out that in the early days of labour law, the legal institutions forming the core of this field on the basis of civil law, in addition to ensuring safe and healthy working conditions, were aimed at removing the discrepancy (dissonance) between equality in the formal sense (equivalence) and inequality in the material sense of the subjects of legal relations in connection with the performance of subordinate work. Their sense boils down to the restriction of the principle of freedom of contract, so that "negotiation" of employment conditions can only take place above (not below) the standard set by the labour law. The author also stresses that in the last decades of the twentieth century, however, the equality aspect of labour law moved into a second phase. A feature of this phase is the accentuation of the need not only to level the privilege of the employer over the employee as the stronger party of the employment relationship, but also to remove inequalities between the employees themselves in matters related to the employment relationship resulting from different treatment by the employer of the individual persons employed by him or her. The "levelling" restriction of the principle of freedom of contract nowadays no longer involves only the prohibition of employers to emploi workers below the standards set by semi-imperative norms of labour law, but also entails the prohibition to apply different standards of employment to some workers than to others without a legitimate reason. According to the author, the equality aspect is also the flywheel of the formation of a new field of law, which we call employment law, whose subject matter is generally understood to be the regulation of social relations involving the provision of non-subordinate work. However, the essence of employment law, at least in its current, initial (germinating) form, is largely based on the uniformization (equalization) of certain elements of the protection of persons providing work on bases other than employment relationships with the protection standards inherent to labour law.

One of the issues commonly discussed today is the issue of universal basic income (UBI). The aim of the paper is to bring closer to the ongoing and slowly "flushing" discussion on basic income within the trade union movement. The trade union movement is deeply skeptical of the UBI. The reasons for the trade union movement's concern in the context of the possibility of using basic income as a response to the processes taking place in the labor market related to technological change seem to be as follows: i) the trade union movement seems to prefer the classic "right to work" over the "right to a basic income" due to the fact that performing work effectively integrates people into social life and is the basis for building a path of personal development; ii) trade unions fear that they will completely lose the ability to influence wages through collective bargaining and that wage issue will return to the sphere of individual tender of strength. It can be argued that where trade unions are still strong and have a real impact on the wage structure (for example Belgium or Germany), they are more clearly opposed to the UBI. Where these organizations operate to a greater extent in a highly flexible environment, they are more positive about this idea.

The Conference, organised by the Faculty of Law and Administration, Department of European, International and Collective Labour Law, University of Lodz within the Visegrad Grant concerning Workplace Whistleblower Protection in the V4 Countries, France and Slovenia (WhistlePro), took place on 15.06.2021. It aimed to present current regulations in the realm of the whistleblower protection as well as proposals for changes and to disseminate the results of the WhistlePro project. Among the speakers there were scientists, including WhistlePro project experts representing universities from V4 countries, France and Slovenia, representatives of the European Commission, state authorities, social partners, non-governmental organizations and employers. Thus, the content of the conference was very diversified and considered multiple points of view.

Workers earning temporarily income outside their residence state are conventionally referred to as crossborder workers. The taxation of cross-border workers is regulated by tax treaties, which determine the state in which income is taxed, and by national law, which determines the amount of tax and the rules for its collection. On the basis of treaties, the remuneration of a cross-border worker will be taxed either only in the residence state or both in the residence state and in the state where the employment is exercised. If the three conditions relating to the length of the employee's stay abroad, the residence of the paying employer and the non-payment of this remuneration by the employer's permanent establishment are met, the remuneration is taxed only in the residence state of the employee. If at least one of these conditions is not met, the state where the employment is exercised and the residence state have the right to tax remuneration, which results in double taxation and the need for the latter state to use one of two methods of avoiding it: the exemption method or the tax credit method. Recently, Polish tax treaties have been amended through the MLI convention, as a result of which the exemption method is replaced by a tax credit method that is less favorable to the taxpayer. At the same time, the so-called abolition relief, which eliminated the differences between these methods, was limited in amount from 2021. The amount of tax in Poland as the residence state of an cross border worker and as a source state for an employee who is a tax non-resident is regulated by the Personal Income Tax Act, with few regulations regarding the status of a cross-border worker. In the case of non-residents, they mainly relate to the rules of tax collection. In the case of residents, apart from favorable solutions (exemption from taxation due to the deduction of allowances for stay abroad), it is worth pointing out to the case-law unfavorable for taxpayers, according to which the employee's income is the expenses incurred by the employer, in particular for paying for the apartment (accommodation) during stay of an employee abroad.

The author of the article considers the issue of appointing and dismissing control inspectors and their place in the organizational structure of the Social Insurance Institution. According to author's opinion are necessary changes, consisting in regulating the status of a candidate for a control inspector and elaborating a professional development path for employees carrying out checks on contribution payers. Therefore, the author tries to indicate the direction of changes, proposing a scheme of professional promotion to optimize the assignment of tasks and increase the effectiveness of the controls.

The objective of the article is to present the institution of employee vaccination and its current legal status. The considerations include examining vaccinations for employees from the perspective of their mandatory or voluntary nature and their consequences for the parties of the employment relationship. Employee vaccinations are related to such issues as the employer's obligation to protect the life and health ofemployees, the outcome of an employee's refusal to undergo preventive vaccinations, and responsibility for employee vaccinations. The investigated subject is crucial in the light of the current SARS-CoV-2 coronavirus pandemic, causing the COVID-19 disease and the resulting possibility of vaccinating employees against this disease.

The author presents the jurisprudence of the Supreme Court regarding the principles of representation of a capital company when concluding an employment contract including other contract with a management board member, under which a work is to be provided by a management