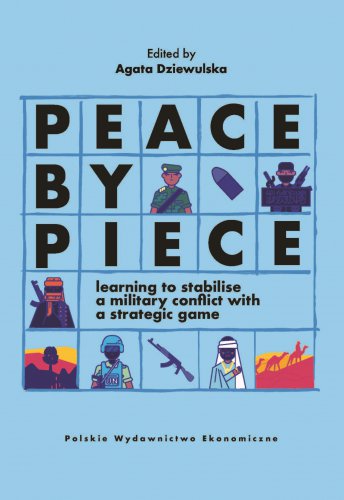 Peace by Piece: learning to stabilise a military conflict with a strategic game

The book consists of chapters grouped into three parts. The first one presents a research and execution plan. It presents the impulse that inspired our scientific curiosity and prompted us to develop the issue of stabilising an armed conflict into a project that was to result in a strategic simulation game. There, we also describe the stages of forming the idea and testing the first assumptions. This is followed by an overview of the general theoretical background from which we started the detailed work, after which we once again put together the elements that we considered crucial in rebuilding the post-war state into a multidimensional whole. This part also outlines the history of Mali, which served as a realistic illustration and an area of analysis that we have engaged in to verify the theoretical solutions.

The second part is the most extensive. It contains the effects of our individual work, which was focused on the synthesis of the theoretical background of our disciplines in a way that it is most useful in the preparation of the strategic game. The theoretical background, from which we have emerged as a result of the dialogue described in the first part, has been broken down in the second part into areas to which we have devoted separate studies. This part is therefore a summary of separate works on the political, military, economic and social dimensions of the peace process. We also refer to the importance of information and the role of infrastructure in the (re)construction of the state.

The third part is a framing device that binds the previously presented theoretical analyses together with a board strategic game. As such, it describes the practical application of theory. Furthermore, it talks about the results of the games and, in a multidimensional way, about reflections on the game and the project. It shows our conclusions from the course of the game and those resulting from the observations of the participants' behaviour. We have tried to formulate sub-questions that have not yet taken the form of research questions, but are coming close to them in order to explore the possibilities of using the game to try to clarify the uncertainties that we have identified during the work on the theoretical background. We treat the book and the game as an open project.

CHAPTER 1. ‘Peace by Piece’: making a serious game to simulate a violent conflict and its stabilization
Agata Dziewulska

SECTION 3. FROM THEORETICAL FRAMEWORK AND PMESII TO THE SIMULATION GAME

Agata Dziewulska is a professor of security studies at the University of Warsaw, concentrating on constructing the structures of power and decision-making in post-conflict states. She holds a Ph.D. from the European University Institute and a ‘habilitation’ from the National Defence University (Poland). She served as an OSCE polling supervisor in Bosnia and Herzegovina and was a Council of Europe expert. She is a member of the Forecast Committee ‘Poland 2000 Plus’ of the Polish Academy of Sciences. For her excellence in teaching, she was awarded by the Rector of the University of Warsaw as well as the Minister for Education and Science.

Paweł Kozłowski is a sociologist and economist. He focuses on political economy, economics of transformation, and social and ideological aspects of systemic transformations. Director for scientific affairs of the Institute of Economic Sciences of the Polish Academy of Sciences, professor at the University of Warsaw. Member of the Presidium of the Forecast Committee ‘Poland 2000 Plus’ of the Polish Academy of Sciences.

Igor Widawski is a serious game designer. He is a sociology graduate after completing his studies at the University of Warsaw and the School of Business and Economics in Maastricht. Awarded author of simulation games designed for education, research, assessment, and building innovations. He is passionate about transforming complex business, scientific, and social issues into smart, engaging games and delivering them to players worldwide.