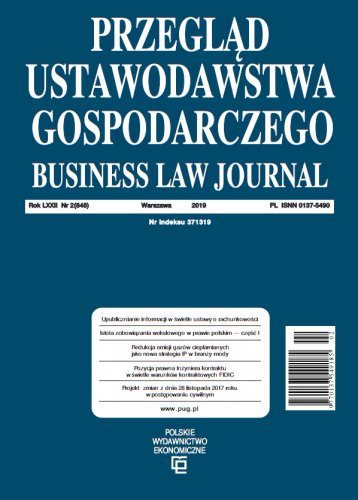 The aim of this article is to look at the new type of foundation introduced into the Polish legal system in the form of a family foundation not only from the perspective of the advantages of this organizational and legal form raised by the Project Initiator, but also the threats perceived in the German doctrine that it may entail. These threats can be defined collectively as the "dark side" of the family foundation. The article omits the assessment of this new legal institution from the tax law perspective, focusing mainly on its private-law aspects.

In Poland, for many years, administrative courts have adjudicated, among others, in tax cases using the in dubio pro tributario principle (the principle of the benefit of the doubt). This principle was not expressis verbis stated in the Polish legal norms. As of 1 January 2016, the legislator introduced in Article 2a of the Tax Ordinance a regulation that "doubts about the content of the tax law that cannot be removed shall be resolved in favour of the taxpayer". Since this rule became binding, questions have appeared as to how such a rule, formulated in this way, should be applied by tax and fiscal control authorities. The aim of this article is to discuss the application of this rule in practice, referring to the decisions of courts. The Author formulates conclusions resulting from the caselaw of courts and indicates at the same time the need to make changes to the provision of Article 2a of the Tax Ordinance. Therefore, de lege ferenda, he suggests changing the provision of Art. 2a of the Tax Ordinance as soon as possible and proposes a broader phrase that "all persons in any way obliged to bear tax burden shall have the right to resolve doubts in their favour".

Efficient and effective public procurement is an integral element of economy and a possibility to reach a broad range of contractors offering high quality products and services. The aim of this article is to discuss selected new legal solutions introduced by new Public Procurement Law, which application may increase the efficiency of public contracts. The article intends to answer the question whether statutory principle of efficiency will enhance the quality of public procurement, making Polish public contract market more competitive. The main research method is a dogmatic-legal method. The analysis conducted in the article indicated that the provisions of Public Procurement Law applicable from 1st January 2021 introduce new legal solutions being an incentive for contractors to participate in public contracts. The consequence of such solutions should be an increase in the number of tenders, giving the ordering parties a bigger chance to obtain maximum efficiency of the implemented contracts and making public procurement market more competitive.

The issue of sale of agricultural properties in tender procedures on the basis of legislation regulating the principles of real estate management is associated with a number of interpretation problems. These arise from the fact that the legislator has failed to distinguish clearly between these regulations and the legislation on shaping of the agricultural system. This issue has not been subjected to a thorough analysis in legal texts so far. Sale of agricultural properties should, in such case, take place on the basis of an open tender, with potential modifications justified by the specific nature of statutory requirements with regard to consent to the purchase of agricultural property, issued by the Managing Director of the KOWR (National Support Centre for Agriculture). There is no basis to state that under the current state of law, it is not possible to sell agricultural properties on the basis of the act on real estate management in the course of a tender procedure, or that in such case, a restricted tender procedure must be carried out, allowing only for participation of individual farmers.