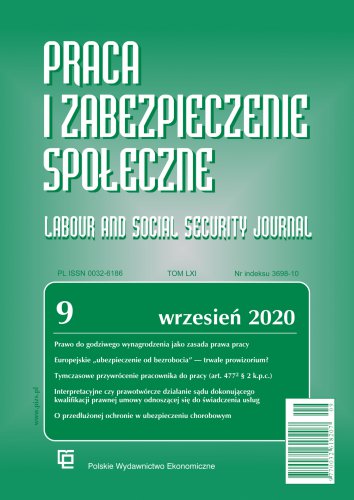 In the study the principle of the employee’s right to fair renumeration, being regulated in art.13 of Polish Labour Code, has been discussed. According to the opinion of the author there are three duties resulting from the above mentioned principle. These are: obligation of the state to establish the minimum wage, to observe by employers the rule of adequate renumeration to amount and quality of labour as well as the non discrimination principle. The duties are connected with the ethical concepts of distributive and commutative justice.

The destabilisation of the hitherto functioning of economies and societies worldwide, including of course in the Member States of the European Union, ongoing since the global COVID-19 outbreak in February/March 2020, is bringing knock-on changes in social policy as well. At present, in many countries solutions are being introduced towards the most urgent objective of limiting the rise in unemployment. The European Union has also reacted quickly to this new situation, as already on 19th May 2020 the EU Council adopted the regulation 2020/672 on the establishment of a European instrument for temporary support to mitigate unemployment risks in an emergency (SURE) following the COVID-19 outbreak. The objective of this text is therefore to concisely analyse this regulation, with the hitherto approach of the European Union to the issue of unemployment insurance described in general in the background. The questions whether the implementation of the regulation in question will actually bring the results intended, and whether this temporary solution will not become more permanent, remain open at this time.

The article concerns the first instance court's possibility - introduced from the November 7, 2019 - to impose on the employer in the judgment reinstatementing an employee to work, the obligation to continue to emploi an employee until the final termination of the proceedings on employee's request (Article 4772 para. 2 of the C.C.P.). Imposing this obligation is called by the authors "temporary reinstatement". The effect of temporary reinstatement to work is the rising again of the employment relationship with the same content as before its termination by the employer. The employment relationship thus created ceases expires in the moment of the final completion of the proceedings regarding the employee's claim for reinstatement to work or as a result of legal events provided for in the Labor Code. The authors approve this regulation and analyze the resulting legal problems and postulate the most frequent use of temporary reinstatement of employees by the courts as often as possible.

The institution of extended protection in sickness insurance, understood as the protection resulting from previous title to insurance and concerning events occurring after the termination of sickness insurance, shows the specificity of protection under social insurance. However, so far, it has not been subject to in-depth theoretical and dogmatic analysis. In the study, the author, having as her basis the legal regulation of sickness allowance and maternity allowance, points to the diverse structure and nature of this protection. She also makes an attempt to explain and assess the differences occurring in this respect.

The Court of Justice of the EU on 16 July 2020 issued a judgement in case C-610/18, AFMB Ltd and Others vs. Raad van bestuur van de Sociale verzekeringsbank, in which the Court has interpreted the concept of ''the employer'' for the purposes of EU law concerning the application and coordination of social security systems. According to the ruling the employer of an international longdistance lorry driver, for the purposes of considered provisions, is the undertaking which has actual authority over that driver, which bears, in reality, the costs of paying wages, and which has the actual power to dismiss that driver, and not the undertaking with which that driver has concluded an employment contract and which is formally named in that contract as being the employer.

The author presents the jurisprudence of the Supreme Court on the issue of terminating the non-competition agreement after termination of the employment relationship before the date for which it was concluded. Particular attention is paid to the judgment of February 20, 2020, in which the Supreme Court allowed the conclusion of this agreement on suspensive condition.