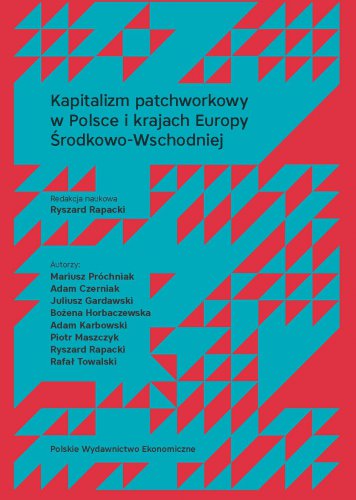 The book presents the findings of an interdisciplinary research project set within a current of comparative studies of capitalism and carried out by a team of authors in the years 2015-2019. Assuming as their starting point the analytical framework resulting from the most recent literature, relying upon paradigms of the new institutional economics and new economic sociology, the Authors have substantially expanded and modified this scope so as to fully take into account the specificities of institutional architecture that evolved in the countries of the former socialist block.

The book presents an empirical panorama of emerging post-communist capitalism in Poland and ten other European Union member states from the Central and Eastern Europe (CEE11) – Bulgaria, Croatia, Czechia, Estonia, Hungary, Latvia, Lithuania, Romania, Slovakia and Slovenia – enabling better understanding of the nature and key distinctive features of that peculiar system. The emphasis in the research was mainly put upon the analysis of a similarity observed in the CEE11 countries between their institutional order and four models of Western European capitalism that coexist in the European Union, i.e. continental, Anglo-Saxon, Nordic and Mediterranean. In the research these models were represented by the most typical “old” Union member states to represent the respective models, which were, respectively, Germany, the United Kingdom, Sweden, and Spain/Italy. In comparative analysis an original method, developed by the Authors, was used – that of coefficients and similarity hexagons.

The findings obtained suggest that the institutional order developed in Poland and other CEE11 countries reveals most similarity to the Mediterranean model of capitalism. At the same time, however, the following are ranked, among other things, as the most distinctive properties of the post-communist capitalism in the Central and Eastern Europe: parallel institutional proximity to other models of Western European capitalism, misalignment of the “building blocks” of its institutional architecture and an evident deficit of institutions complementarity. Due to these characteristics, the post-communist institutional order in the CEE countries constitutes a new, distinctive model of capitalism, quite separate from others, previously existing in the European Union, the essence of which is best described a “patchwork capitalism”.

RYSZARD RAPACKI, PhD Dsc, Full Professor, works in the Chair of Economics II in the College of the Global Economy, the Warsaw School of Economics, of which he was the head in the years 1987–2018. In the years 1991–2017 lectured in KSAP (National Public Administration College). Lecturer in the Center for European Integration Studies (ZEI) in the University of Bonn, Germany. Senior Fellow in ZEI and Adjunct Professor in Carlson School of Management, University of Minnesota, USA. In the past, lecturer in universities in USA, Finland, Latvia, Mexico and Ukraine; fellow of the Fulbright Program, USA, and consultant to the UN (counseling and training missions in over a dozen countries of Africa, Asia, Europe and the Caribbean). Author of over 200 scientific publications in Poland and abroad (Austria, Belgium, Estonia, Mexico, Germany, Taiwan, USA, United Kingdom) on institutional variants of capitalism, economic growth and real convergence, economic transformation, privatization, and international technology transfer.