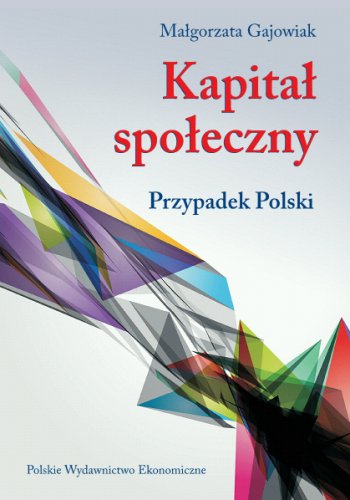 In the face of ever evolving processes of internationalization and globalization it becomes more and more complicated to foresee social and economic consequences of technological progress, of hyper-competition or of policies run by individual states. As an extent of an increasing extent of uncertainty and unpredictability, intangible assets, including, in particular, social capital, become more and more important.

The principal objective of the book is to present the economic connotation of social capital. The monograph consists of four chapters. In chapter one the Author presents various approaches to interpretation of social capital; in chapter two me makes an attempt to catalogue its sources. Chapter three is dedicated to reflection on systemic prerequisites of creation of social capital. Finally, chapter four focuses on empirical approach and attempts to transfer the theoretical concept of social capital into the social and economic reality of the period of privatization of Polish state-owned enterprises in the years 1990–2009.

The book is addressed to students of economics, management, sociology, members of scholar staff in universities, as well as to representatives of institutions of the government and local governments.

The manual contains a lecture of finance and accountancy for engineers. It discusses, among other things, the following:

The manual is supplemented with control questions added at the end of each chapter, examples and a vocabulary of important terms, thus making it easier for readers to understand the issues discussed.

Małgorzata Gajowiak, PhD, is an associate professor in the Chair of Economic Sciences in the Faculty of Management Engineering, Poznan University of Technology, and graduate of the Poznan University of Economics and Business. Her scholar interests and research focus around social capital, its functions and the importance of the state in creation of basic designates of that capital. Author of many articles concerning social capital and the effectiveness-fostering role it plays in the area of economic management, and monographs Sources of Social Capital Creation, as well as an editor and co-author of other books and academic manuals. Member of the Polish Economic Society.