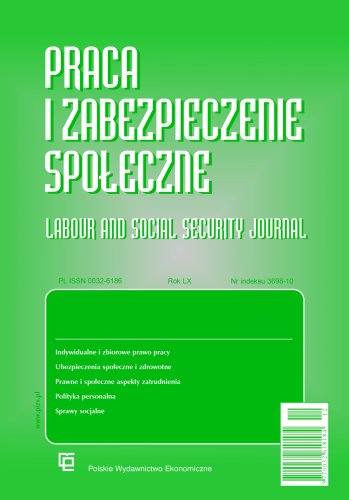 In the study, the author undertakes a polemic with the position of Anna Musiała. It indicates that the Author's theses are analyzed in isolation from model issues and the basic concepts arising from them. In his polemic, he also draws attention to the issue of protection of employee non-property claims in the concept of Anna Musiała. In the author's opinion, the extension of the non-pecuniary damage model may destroy the compensatory nature of monetary compensation.

The article discusses an issue significant both from a theoretical and practical point of view, whether in a case of an employee's claims for unjustified or unlawful termination of employment, brought against the employer under Article 415 of the Polish Civil Code (in connection with Article 300 of the Labour Code) and not under the Polish Labour Code, the competent court composition is the one defined in Article 47 para. 1 of the Code of Civil Procedure (i.e. one judge composition), or rather in Article 47 para. 2(1)(a) of the Code of Civil Procedure (i.e. lay judges composition). There is certain divergence of views on this issue in the judicature of the Supreme Court and common courts. As it seems, the prevailing position is that a case concerning such claims is to be examined by a court composed of one judge.

The paper discusses the legal consequences of the judgement of the Polish Constitutional Tribunal in case no. K 7/15, which challenged the constitutionality of the existing rules for determining the amount of the payment for leave not taken of a dismissed policeman. The legal loophole and the state of normative uncertainty that have arisen as a result of the ruling, aggravated by the legislator's inaction in adopting new regulations, have caused numerous problems in the legal practice. It is not only public administration bodies, but also administrative courts that are facing them now. The author tries to point out these problems and, referring to the theoretical model of effects of constitutional court's rulings, developed in the jurisprudence, indicates some possible ways to solve them. The analysed issues go beyond the direct consequences of the judgement, and thus the latter constitutes only a starting point for further considerations, which refer to specific methods of legal interpretation, inter alia, the concept of direct application of the constitution.

The article presents protective rights afforded to employeesother immediate family members by the Act of 16 May 2019 amending the Act — Labour Code and certain other acts. At the beginning, it was reminded that the term "employee-other immediate family member" was introduced in the Labour Code by the Act of 24 July 2015 amending the Act — Labour Code and certain other acts. Due to the amendment of 24 July 2015, employees-other immediate family members were included in the class of persons entitled to maternal or parental leave. The following parts of the article discuss specifically — as presently afforded to employees-other immediate family members — the right to pay for the entire period of unemployment applicable in case of taking up employment as a result of reinstatement. The article explains the crucial relation between the new protective rights under Article 47 LC, Article 57 para. 2 LC and the amendment to Article 177 para. 5 LC. It also points to the positive impact of the reforms made by the legislator in the amended Articles: 50 para. 5 LC and 163 para. 3 LC. Attention was also drawn to the amendment to Article 4772 para. 2 of the Code of Civil Procedure, introduced by the Act of 4 July 2019 amending the Act — Code of Civil Procedure and certain other acts, in relation to the court's power to impose on an employer the obligation of further employment of an employee until valid conclusion of judicial proceedings. The final part of the article contains considerations on the weakest aspects of the reform introduced by the legislator in the amendment of 16 May 2019. It was emphasized that the legislator's use of the term "employee-other immediate family member" significantly impairs the positive effect of the commented reform of the Labour Code.

The author discusses the jurisprudence of the Supreme Court regarding the change of the demand from reinstatement to work to compensation and vice versa, with particular emphasis on the judgment of February 11, 2020, I PK 243/18.