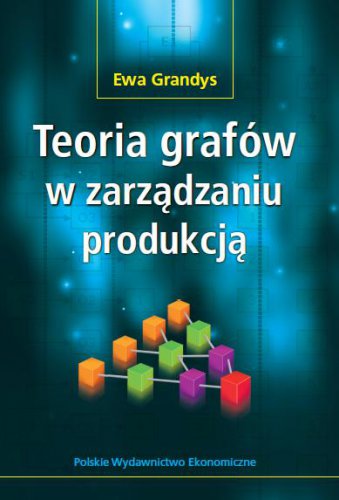 Many processes are determined by their duration. Their observation enabled the Author, Ewa Grandys, PhD to develop an original model and a method of production management. This new proposal was called the Production Process Control Tree (PPCT) which underlines the application of graph theory for planning the process and for controlling of steering type of its implementation. The method makes it possible to meet the planned deadline of the process completion, never mind any potential turbulence in either inner or external conditions (or unchartered changes of such conditions).
The book is addressed to scientific personnel dealing with organization and management of production, as well as anybody interested in modern methods of production management.

One must still have chaos in oneself
to be able to give birth to a dancing star.
F. Nietzsche

In his treaty about creativity J. Tischner states that any creative work requires creative thinking that everybody should incessantly relearn, because “learning how to think is similar to learning how to walk. You have to find yourself a master, grab his hand, walk a few steps along, then release the helping hand and try it on your own. However, there is a difference: whoever learnt how to walk once, may well forget the master. And whoever began to think independently, should still revert to the pattern once in a while”. This quotation confirms that new areas of knowledge can only be developed on the basis of the output of earlier thinkers. By contributing our own stone to the wall, we get an opportunity to collectively build a lasting structure of knowledge. There may be some analogy found to the quote given above in a statement by I. Newton, who also achieved success partly thanks to earlier studies on the motion of celestial objects, carried out by Galileo, and to the law of planetary motion regarding ellipses, formulated by J. Kepler. Fittingly, Newton summed up his findings with a famous sentence: “If I have seen further than others, it is by standing upon the shoulders of giants”.
In the spirit of this message, the book analyses the hitherto-existing status of knowledge about management, up to a scope necessary to put a finger at a gap in cognition and thus specifying direction for the study to undertake. This summary of the existing output begins with a review of literature in the field. Confronted with the research needs of this work, this enabled the Author to come up with a hierarchical division of knowledge about management. Its three levels are as follows: management of an organization as the broadest term having the most extensive scope, management of an enterprise, as well as management of production which became the proper field of research here. Considering this, the book assumes not to provide a comprehensive review of knowledge in the entire area in question. Instead, it is mainly focused upon presentation of findings of the Author’s own research.
According to the theory of management, management of production includes provision of scientific solutions to problems concerning the processes that aim at generation of a product. Being focused on the processes of production “rather than upon jobs, people, structures and functions, makes it possible to observe the principal objective of the process and not its individual components”. Indeed, process-focused approach has been chosen by many authors.
This has become the basis for development of a model of management of production of good having short life cycles. The latter notion has been “borrowed from natural sciences because of an analogy observed between living creatures and some products which also are born, reach their maturity, then become old and finally die”. This expression became popular after being used in the European Commission’s project entitled The European Platform on Life Cycle Assessment (LCA)5 from 2005, in which an evaluation of life cycle was extended onto business and the European Union’s policy.
This approach encouraged to undertake action in similar directions which resulted in the development of Ph. Kotler’s sales curve and creation of a model of production cycle of products. The model was verified over many years of studies as well as by the practice of managing the production of goods having short life cycle. The book shows that any potential extension of any of sub-processes of that cycle causes shortening of time in which it sells, and in extreme cases even its elimination. In such conditions it is time that occurs the key parameter of management of production of short life cycle goods.